The intense pressure of the 2019 season finale and a tight championship fight clearly brought out the best in the Californian. Fong powered into the lead aboard his GSX-R600 from the start after claiming pole position earlier in the day. And despite racing in a three-rider pack for the majority of the stressful affair, Fong skillfully controlled the race from the front.

He led across the start/finish stripe from the opening lap to the last, only giving a rival an opportunity to stick a wheel out in front of him on three brief occasions, before responding and regaining the lead each time.

Even when an unlucky run through heavy traffic on the race’s final two laps brought his rivals right back to his rear wheel, Fong responded like a champion. He ripped off a lap just 0.005-second off the best of the race (a lap quicker than any other rider could manage even in qualifying) in his final run to the checkered flag, wrapping up both the race win and the title with sensational style.

As a result, Fong opened up an unassailable 26-point advantage and was crowned 2019 MotoAmerica Supersport Champion for the first time in his professional career, with Sunday’s race still to run.

Even with that race remaining, Fong assembled his championship campaign on 13 top-two finishes in 16 attempts, including five victories.

The new Supersport Champion said, “Honestly, it’s unreal. I’ve got to give it up to my team and my crew, who believed in me all year long, and to everyone else who has worked their butt off to help me make this happen, including my riding coach Josh Hayes.

“The nerves have been so high this weekend and I felt the pressure of people outside the team doubting me. There’s been some sleepless nights. I’d never been in this position before… I’ve never felt so much pressure, but I knew I had the bike underneath me to do it.

“This morning in qualifying we knew we had the pace, and I just had to ride smart. Once the visor went down, I just tried to hit my marks and rode a good, smooth race.

“I was in disbelief when my guys told me I had locked up the championship. I busted out in tears. It’s been such a long road to get here. I’m thankful for where I’m at today.”

Fong’s M4 ECSTAR Suzuki teammate Sean Dylan Kelly was in contention early on, running fourth during the opening laps and closing down on the leading three. However, after he nearly crashed in a violent slide on the newly repaved track, Kelly dropped back to sixth, and he spent the remainder of his race in recovery mode. Kelly finally made good on those efforts, retaking fifth position and defending it to the flag by 0.085-second.

Team Hammer is now in prime position to follow up its sixth AMA Pro/MotoAmerica National Championship with a seventh come Sunday. Twins Cup title leader Roadracing World Young Guns Suzuki’s Alex Dumas posted the fastest lap during provisional qualifying (1:31.742) on Saturday and will open tomorrow’s race aboard his Suzuki SV650 with a 21-point advantage working in his favor.

Meanwhile, Autovest Suzuki’s Joseph Blasius will look to work his way up the order in Sunday’s qualifying session after finishing provisional qualifying in 15th (1:34.689) despite riding just 3-1/2 weeks after undergoing surgery to repair a broken right wrist and a broken metacarpal in his left hand.

Saturday was a tough day for M4 ECSTAR Suzuki Superbike pilot Jake Lewis. The Kentuckian ran off track and crashed in the gravel on lap two of the day’s premier class showdown. Lewis once again demonstrated his mettle, picking his machine back up and racing to an eventual 12th-place finish. 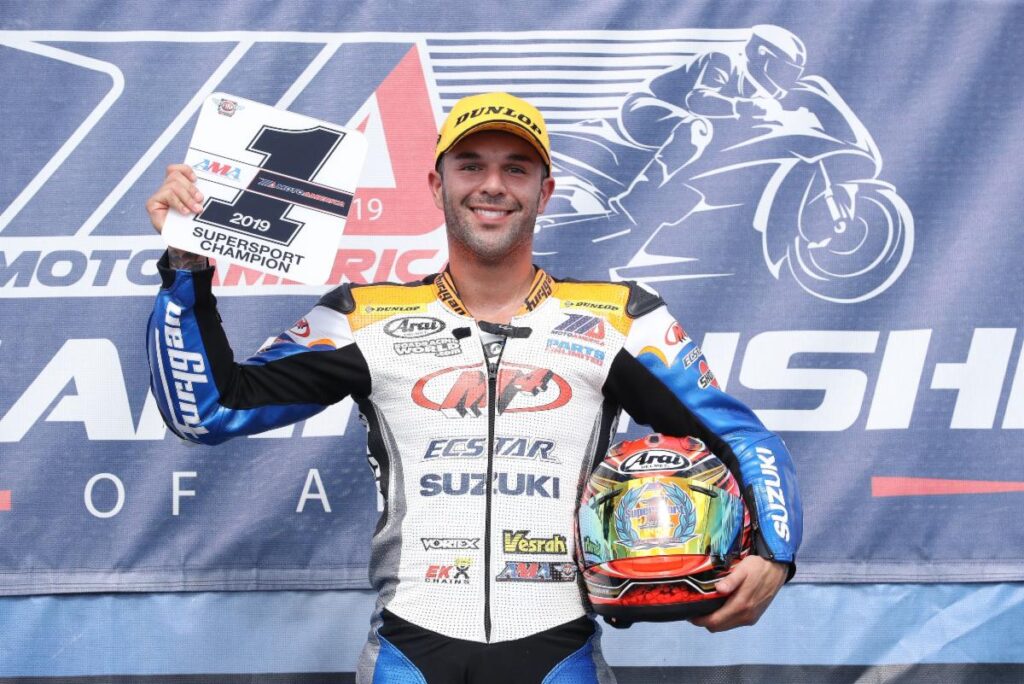