Brea, CA (September 22, 2019) — One day after securing the sixth AMA Pro/MotoAmerica National Championship of its illustrious history, Team Hammer added a seventh to its long list of accomplishments as Roadracing World Young Guns Suzuki’s Alex Dumas put the finishing touches on his successful MotoAmerica Twins Cup title campaign in the final race of the 2019 season at Barber Motorsports Park.

Despite entering the day with an imposing points lead and having the option to cruise around for points, Dumas earned the title in impressive fashion. The talented Canadian teenager twice took the holeshot on his Team Hammer-tuned Suzuki SV650 in the once red-flagged and restarted race and promptly went wire-to-wire at the front despite battling a tight four-rider pack for the win.

Although he took the checkered flag first, Dumas was later assessed a one-second penalty for weaving during the final sprint to the stripe. That decision dropped him back from first to third in the final race results, which was still easily enough to earn him the 2019 class crown.
Even without being credited with Sunday’s triumph, Dumas earned five victories on the year and finished on the podium in the final eight races of the 11-race championship.

Dumas said, “The beginning of the season didn’t go how we planned and Team Hammer responded by just making my bike faster and faster all year. And now we have the #1 bike.

“I really want to thank team owners John and Chris Ulrich for this opportunity in the Twins Cup. I also want to give a huge shout out to the whole Team Hammer crew who worked so hard on the bike. I’m a little bummed to end up third today, but that was my mistake. I apologize for that.

“I’m extremely happy about this championship; it really means a lot to me. And I think we’re going to come back even stronger in 2020.”

After locking up his championship on Saturday, 2019 MotoAmerica Supersport champion Bobby Fong was free to push the limits and again demonstrate his pace on his M4 ECSTAR Suzuki in Sunday’s finale.

That pace saw him leave the field in his wake as he lapped almost four tenths faster than his pole time. As a result, Fong broke free from the start and piled up a multi-second advantage in his favor. However, the Californian crashed avoiding a lapped rider with five laps remaining.

That late incident brought out a red flag and the race was ultimately called complete. The official results credited Fong with his final victory of the season. As a result, he ended his remarkable championship campaign with six wins and 14 podiums in a year in which he never took the checkered flag lower than second in any given race.

“I’m happy to get the win,” said Fong. “I felt I was the fastest guy out there today. The pressure was off having locked up the championship on Saturday. I was able to race my own race and I felt good doing my own thing. I crashed when I missed my line getting through lapped traffic and it brought out the red flag. The rules are the rules and we got the win. Sometimes, these things go against you a little bit like they did for us at Daytona and VIR but they went our way today. I’m happy for our team and it is good to close out the year this way.”

MotoAmerica rookie Sean Dylan Kelly officially ended up fourth in the race results despite celebrating on the podium. He also finished fourth in the 2019 MotoAmerica Supersport standings on the strength of two wins and seven podiums.

Kelly said, “We made a pretty big step compared to yesterday. We were struggling all weekend long and crashed in FP1, which didn’t help. We’ve been working really hard.

“I want to thank my crew chief and the whole M4 ECSTAR Suzuki team for all that work and all their patience. They’ve been amazing this year. We picked up a number of podiums and met our goal with a couple of wins in the middle of the season.

“As a rider, we always expect more. But overall, this is my first season and the objective was to learn and I think we learned quite a lot. Every weekend was something new. We have some work to do over the winter, but I learned a lot this season and I’m super grateful for the opportunity.

“It was also great to have Bobby as a teammate. He was doing some incredible lap times out there. I was running almost a second faster than yesterday, and he was just going away from us at the front.”

M4 ECSTAR Suzuki’s Jake Lewis concluded the 2019 MotoAmerica Superbike campaign with a eighth-place result aboard his GSX-R1000 on Sunday. The Kentuckian closed out the season ranked seventh in the premier class with seven top-five results on the year.

Autovest Suzuki’s Joseph Blasius also picked up a top ten for Team Hammer on Sunday with a ninth-place finish in the Twins Cup race. Blasius had surgery to repair a broken right wrist and a broken left metacarpal just three and a half weeks ago but closed out the season with an impressive ride that showed his toughness and dedication. He ended the season seventh in the Twins Cup standings with a podium and four top-fives. 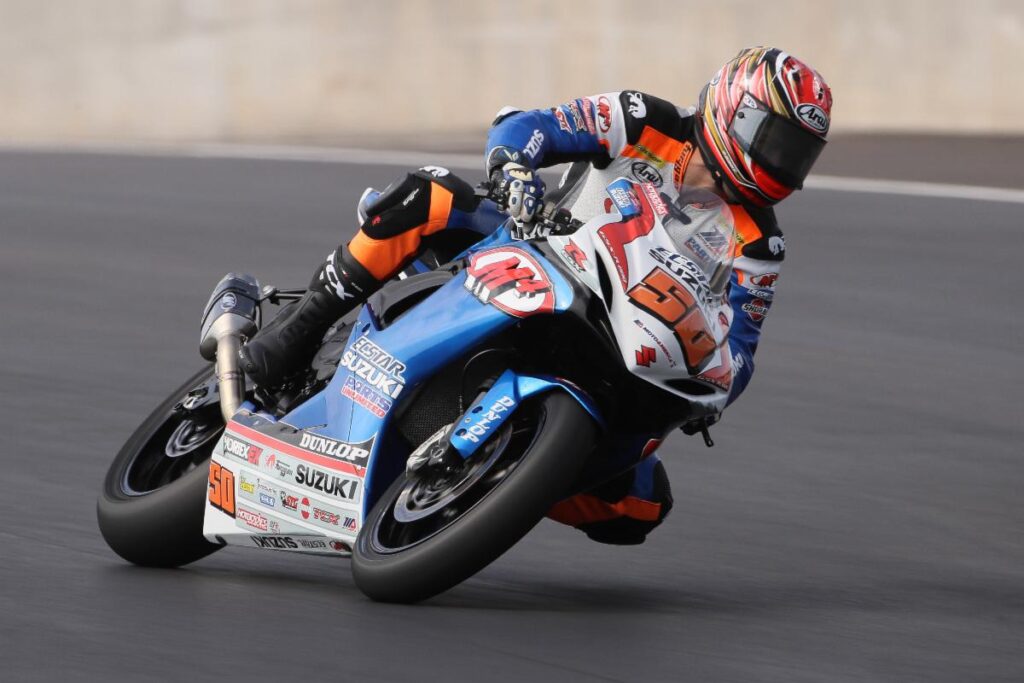