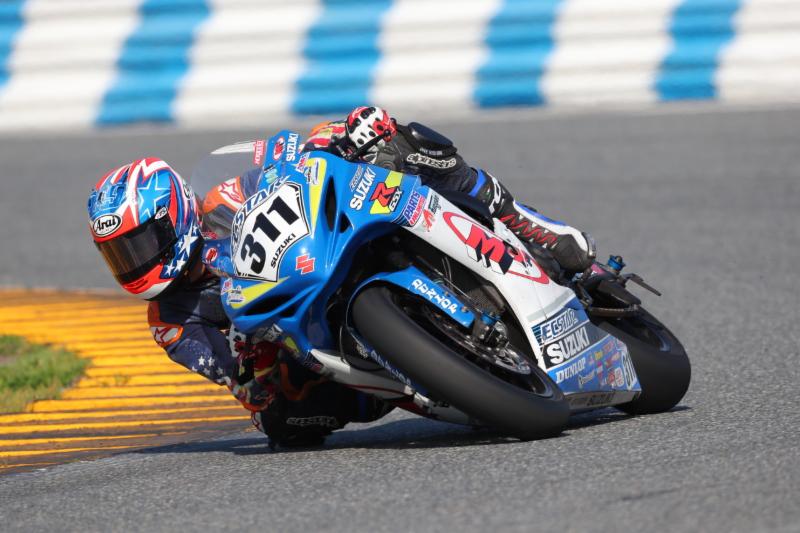 Team Hammer has locked down the top two spots on the grid for Saturday’s 78th Daytona 200. Pitted against a deep field of contenders boasting a stack of national titles and Daytona 200 victories, Team M4 ECSTAR Suzuki teammates Sean Dylan Kelly and Bobby Fong showcased spectacular speed on Friday afternoon to qualify on pole and in second position, respectively.

Teenager Kelly has been blazing fast at Daytona International Speedway, and threw down a best time of 1:49.064 in the third and final qualifying session. In doing so, he became the youngest pole winner in the prestigious race’s nearly-eight decade history, at 16 years and 302 days old.

Kelly has impressed not only with his rapid pace, but also his rapid adaptation to the team and its Suzuki GSX-R600 Supersport racebike following three seasons riding what is essentially a Moto3 250cc racebike in the MotoGP Red Bull MotoGP Rookies Cup.

After winning the pole, Kelly said, “Overall, I’m really, really happy how we’ve started this week. I wasn’t expecting the pole position here at Daytona, but I’m really happy to start this way. We’ve been moving in a good direction from the first moment on the bike. Working with my crew chief, Jeremy Toye, we’ve continued to make good steps, and overall, I’m happy with how the bike is working — and really how the whole team is working. This is just about the best way to start the weekend, and tomorrow we’ll see if we can finish the job.”

Fong, a 28-year-old AMA Pro and MotoAmerica veteran, will start from second on the grid with a best lap of 1:49.354. Earlier, he’d set the time to beat heading into the final session, having sat on provisional pole for the first two qualifying sessions. The experienced Fong has previously finished on the podium in the grueling 200-mile race and understands what it will take to translate his undeniable speed into race-winning form.

“I’m excited to get the 57 laps going tomorrow,” said Fong. “We’ve been working good all weekend, and actually, ever since I first got on the bike last Tuesday, I’ve been happy with it. My teammate is going good, too. It’s a long race so anything can happen. The fastest rider doesn’t always win in the end here, so we’ve just got to play it smart, have a good strategy, and charge hard. My fitness is good. I’ve been training hard, and there’s nothing out there that is going to fatigue me. It’s just a mental game out there, and I’m ready to get going.”

The 78th Daytona 200 is scheduled to get underway at 1:00pm ET on Saturday afternoon.