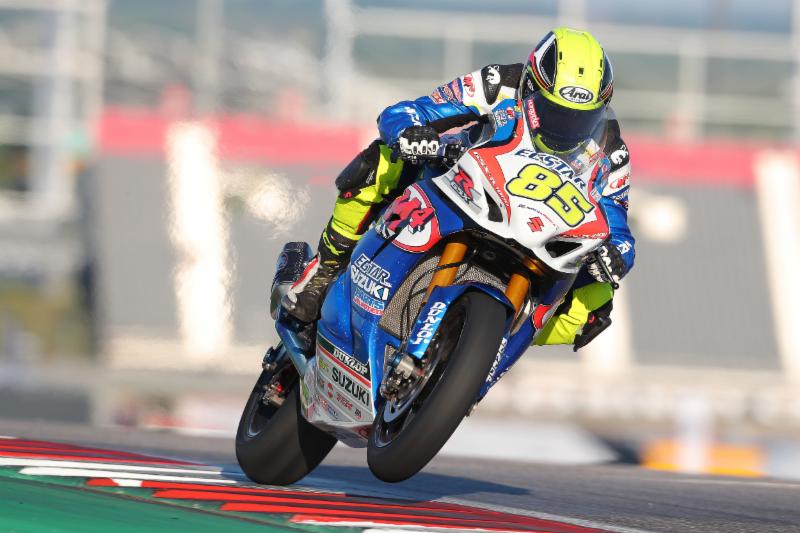 M4 ECSTAR Suzuki’s Jake Lewis secured his first top-five result of the 2019 MotoAmerica Superbike season with a promising ride in Sunday’s Race 2 at the Circuit of the Americas in Austin, Texas.

Moments after the conclusion of the weekend’s dramatic MotoGP race, the Superbike stars hit the circuit for the final time. Lewis got away with the leaders aboard his GSX-R1000 race bike and immediately demonstrated the capacity to equal their hot pace.

Lapping nearly a second-and-a-half quicker than yesterday’s best (2:10.001 vs 2:11.403), the Kentuckian made a move to slot into sixth while working lap four. He then picked up another position during the race’s last two laps to break into the top five, and held the position to the checkered flag.

At the end of the combined MotoAmerica/MotoGP weekend, Lewis said, “We made some big improvements, and today’s race was a lot better than yesterday’s. We got off to a good start and were able to run with the leaders. The pace was really fast — I went over a second faster today, which was nice — and I actually got to learn some things running with those guys.

“I made a pretty big mistake with about six laps to go. Up until then I was riding pretty much at the limit and had a few moments. At that point, I backed off and brought it home because I realized wasn’t going to be able to catch them.

“It’s nice to get our first top five of the year and be the top non-factory bike out there. Overall this was a much better weekend than last week, and we keep making progress. We’ve got a couple weekends off to heal up and perhaps even test in order to get ready for the next one, which should be a good race weekend for us.”

Felipe MacLean made progress in Race 2 as well. He put in another points-paying ride with a second 14th-place finish on the weekend aboard the second M4 ECSTAR Suzuki GSX-R1000, while upping his pace considerably in the process. Like Lewis, MacLean dropped his fast time by around a second-and-a-half on Sunday compared to the day before.

The full Team Hammer contingent will be back in action on May 4-5 when MotoAmerica travels to Virginia International Raceway for the first two-day race weekend of the 2019 season.