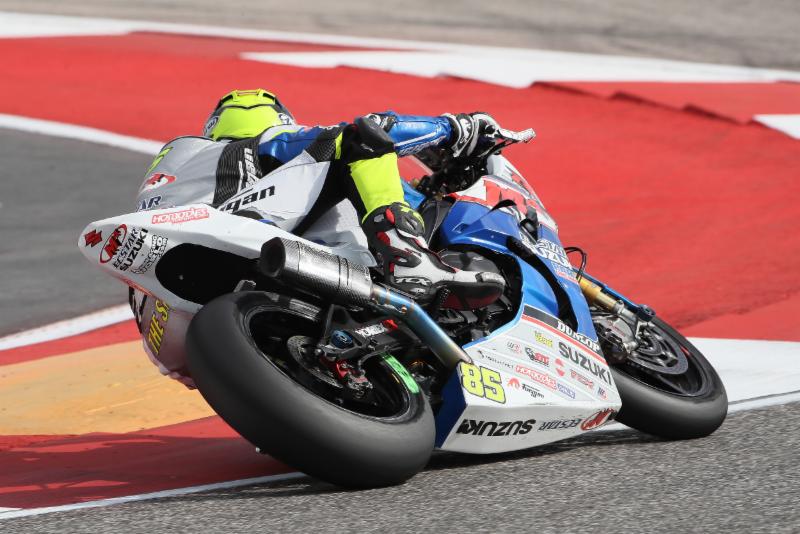 M4 ECSTAR Suzuki’s Jake Lewis picked right up where he left off at last weekend’s
MotoAmerica AMA/FIM North American Road Racing season opener with a second consecutive sixth-place finish in Saturday’s MotoAmerica Superbike race at the Circuit of The Americas.

Running alongside the MotoGP World Championship, Lewis did well in the 15-lap race with the eyes of the motorsports world focused firmly on Austin, Texas, this weekend.

The Kentuckian got off to a strong start aboard his M4 ECSTAR Suzuki GSX-R1000 after starting on Row 3. He quickly picked up another position to take over fifth place and ran as part of the lead group early in his bid to score his first top-five of 2019.

However, Lewis’ pursuit ultimately ran out of steam as tire wear increased, and he fell into a relatively lonely ride to sixth where he would finish.

Lewis was upbeat after the race and feels there’s still room for improvement ahead of tomorrow’s rematch.

He said, “Overall, this weekend has been quite a bit better than last weekend. We struggled some in Atlanta, but the Circuit of the Americas is definitely one of the tracks that I really like, and we’re making progress with the bike and the electronics step-by-step. We’ve been working hard and the M4 ECSTAR Suzuki guys have been putting in a lot of great work and effort for me.

“I knew I had the speed to run inside the top five. I got off to a good start and learned some things. A little past halfway, I encountered a few issues as the tires wore and that made the bike harder to ride.

“We brought it home for another sixth place, which is solid. We’ve got a lot to build on for tomorrow’s race. For sure, we’ll look to close the gap on the front guys and get in the top five. Being the top privateer would be nice, but we’ve got some more work to do before then to make that a realistic possibility.”

Meanwhile, Bolivian Felipe MacLean made his 2019 MotoAmerica debut in a wild card ride on the second M4 ECSTAR Suzuki GSX-R1000.

MacLean put in a points-paying ride on Saturday, finishing in 14th position.

Lewis and MacLean will be back in action again on Sunday in Superbike Race 2 to conclude the combined MotoAmerica and MotoGP weekend at the Circuit of the Americas.