ELIAS RETURNS TO THE PODIUM IN NEW JERSEY 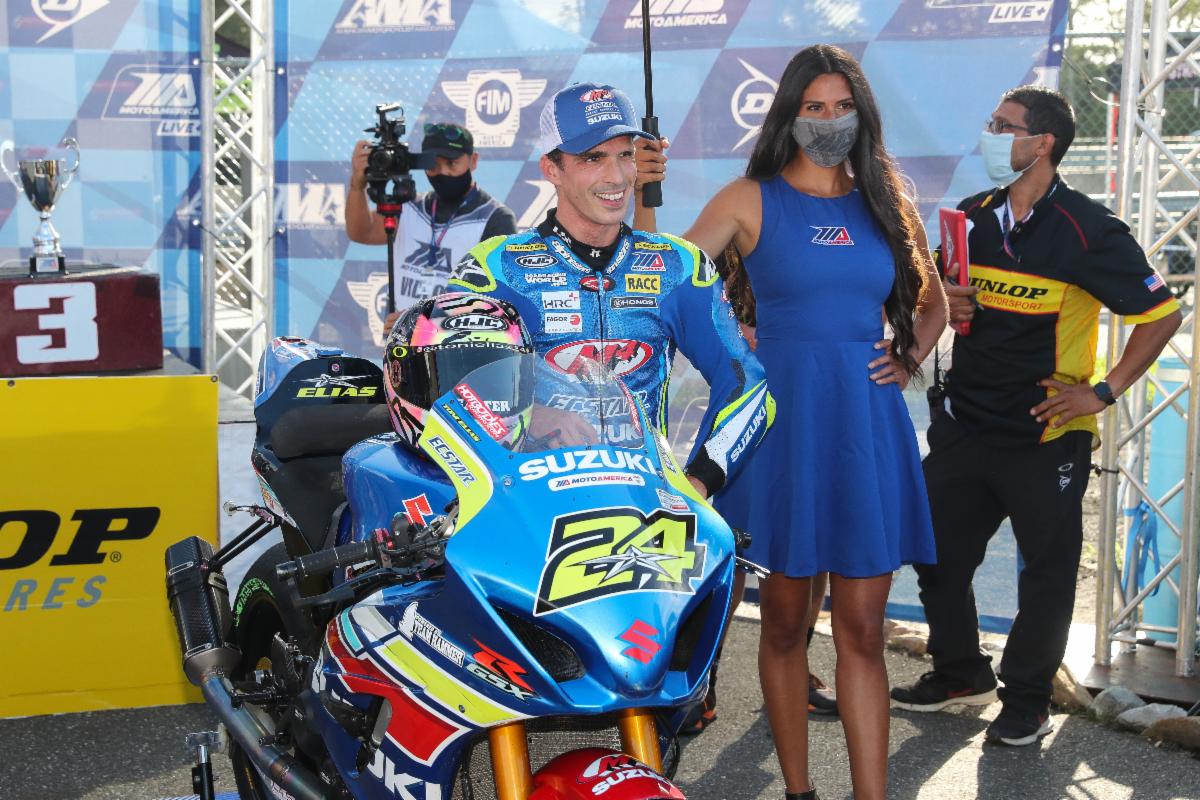 Team Hammer underlined its multi-class excellence by placing two or more riders on the podium for the tenth consecutive MotoAmerica race day on Saturday at New Jersey Motorsports Park.

One rider who had unexpectedly yet to play a part in that remarkable feat finally broke through in a big way to contribute on Saturday; 2017 MotoAmerica Superbike champion Toni Elias earned his first top-three finish of the season aboard his M4 ECSTAR Suzuki GSX-R1000.

Elias got away in fourth and picked up a position on the opening lap. It was clear sailing from there for the Spaniard, who views the third-place performance as an indication of even better days ahead.

“It feels great to get back on the podium,” Elias said. “We still have a lot of work to do, but this is the first step. Thanks to my team for all the support. Let’s continue like this and, sooner or later, we will arrive back on the top step of the podium.”

Despite still suffering from the effects of an earlier fall, Bobby Fong put forth another courageous effort to put two GSX-R1000s in the top five. The reigning MotoAmerica Supersport king was forced to gamble on his set-up but still managed to fight for fourth well into the contest before turning his attention to securing fifth at the flag.

Meanwhile, Sean Dylan Kelly scored his tenth straight podium finish in MotoAmerica Supersport competition. It speaks well of ‘SDK’ and his M4 ECSTAR Suzuki team that the Floridian encountered difficulties during the race, resulting in his worst finish since the season opener, and he still finished on box.

Kelly expected more than third after earning the pole on his GSX-R600 but was grateful to collect the points that he did. He explained, “I was looking for the win, but honestly, I’m just happy we made it on the podium today. We ran into an unexpected issue during the race and had to worry about not losing the podium spot.

“Obviously, third is not what we wanted and not what we needed, but this is racing. I’m happy we were able to salvage a podium and still be in the championship fight. We’re going to keep on fighting and come back stronger tomorrow.”

Landers opened a gap by the race’s second corner and instantly demolished any hopes the field may have entertained about contending for the victory.

Landers’ fourth triumph of the season elevated him into the Twins Cup championship lead.

He said, “We weren’t sure about our tire choice, so I tried to put in a good first few laps and then go into tire management mode. It was a great race, and I had a lot of fun. I was trying to manage the gap at about five seconds and I did pretty good at that.

“I have to give it up to my SportbikeTrackGear.com Suzuki team. The bike worked so well all weekend long and they put a great program underneath me every single weekend.”

Team Hammer will round out the MotoAmerica AMA/FIM North American Road Racing weekend at NJMP on Sunday.