KELLY AND SILVA SHINE FOR TEAM HAMMER IN WASHINGTON

Home » KELLY AND SILVA SHINE FOR TEAM HAMMER IN WASHINGTON 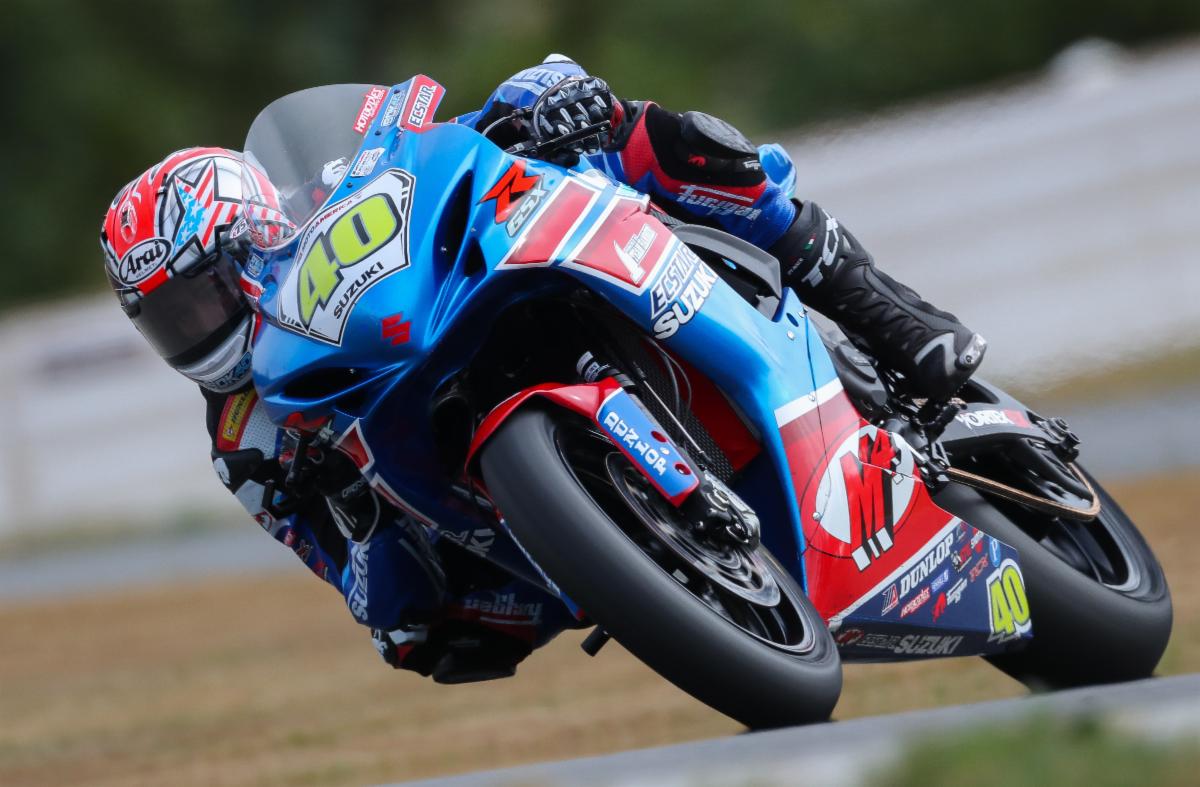 ‘SDK’ was in spectacular form throughout the weekend, securing the pole aboard his M4 ECSTAR Suzuki GSX-R600, trading haymakers up front en route to a Saturday second, and then racing home with an 18-plus-second margin of victory on Sunday.

The Florida native sprinted ahead at the start, which crucially moved him clear of a first-turn incident just behind his rear wheel. He then pressed forward with a punishing pace, which broke the challenge of another rival, opening the path to a walkaway win.

“I’m happy to be in the P1 spot and pick up 25 points,” Kelly said. “I wasn’t too aware of what was going on behind me. I did hear something in the first corner, and it sounded really close so I thought it might be one of the guys right behind me. I just focused on my own race and went as hard as I could. I definitely had a better pace compared to yesterday.”

“I’m really happy to get my second victory on the season, but we know we still have work to do. We have a long way to go to get what we want this season. We’re working really hard, and I want to give a huge thanks to my whole M4 ECSTAR Suzuki team for believing in me.”

Adding to the team’s joy was the fact that Kelly’s ever-improving Supersport stablemate, Lucas Silva, gave M4 ECSTAR Suzuki a magnificent 1-2 in the race.

Silva did well to avoid the early-race drama and then demonstrated a hot race pace more than a half-second stronger than his qualifying best.

He said, “Honestly, I have no words. With everything that happened in the race, I had to keep my focus. I tried to do my best to hang with the leaders in the first few laps, and once I saw there wasn’t anyone behind me, I just maintained my pace.

“Man, I don’t even know what to say. This is amazing. I did the whole cool down lap smiling and crying. Thank you to everyone.”

Meanwhile, in the premier MotoAmerica Superbike class, Bobby Fong collected a pair of thirds that were as impressive as victories under normal circumstances.

Fong put on a brave face despite still riding in considerable pain after injuring his left hand at the previous round. Despite the added difficulty, the Californian put up a serious fight in both races. He battled for second to the last lap on Saturday, and then did the same on Sunday, registering his fastest lap of the entire weekend on the final lap to close to within a half-second of second place.

Fong said, “What can I say? My M4 ECSTAR Suzuki GSXR-1000 made me look good. This double podium definitely feels like a win after going down in Pittsburgh. I’ve got to give it up to the Lord, my crew, my coach, and all the doctors looking after me this weekend.”

Former series champion Toni Elias finished fifth on the track each time out, including a spirited battle in Sunday’s race that saw him make a pass for position on the last lap. Elias was docked one spot, however, when he ran straight through the turn one chicane after the race was over and was classified in sixth.

With all the highs, the team also suffered a low on the weekend. The meteoric rise of Alex Dumas was placed on a temporary pause when he suffered a broken bone in his right arm after getting caught up in a first-corner incident in Saturday’s Superbike contest.

As a result, the French Canadian was unable to take his front-row grid position and seek his maiden Stock 1000 race win in Sunday’s class contest.

M4 ECSTAR Suzuki and the rest of the MotoAmerica paddock will now travel across the country for Round 6 of the 2020 MotoAmerica AMA/FIM North American Road Racing at New Jersey Motorsports Park on September 11-13.