FONG WINS BIG FOR TEAM HAMMER AT THE BRICKYARD

Home » FONG WINS BIG FOR TEAM HAMMER AT THE BRICKYARD 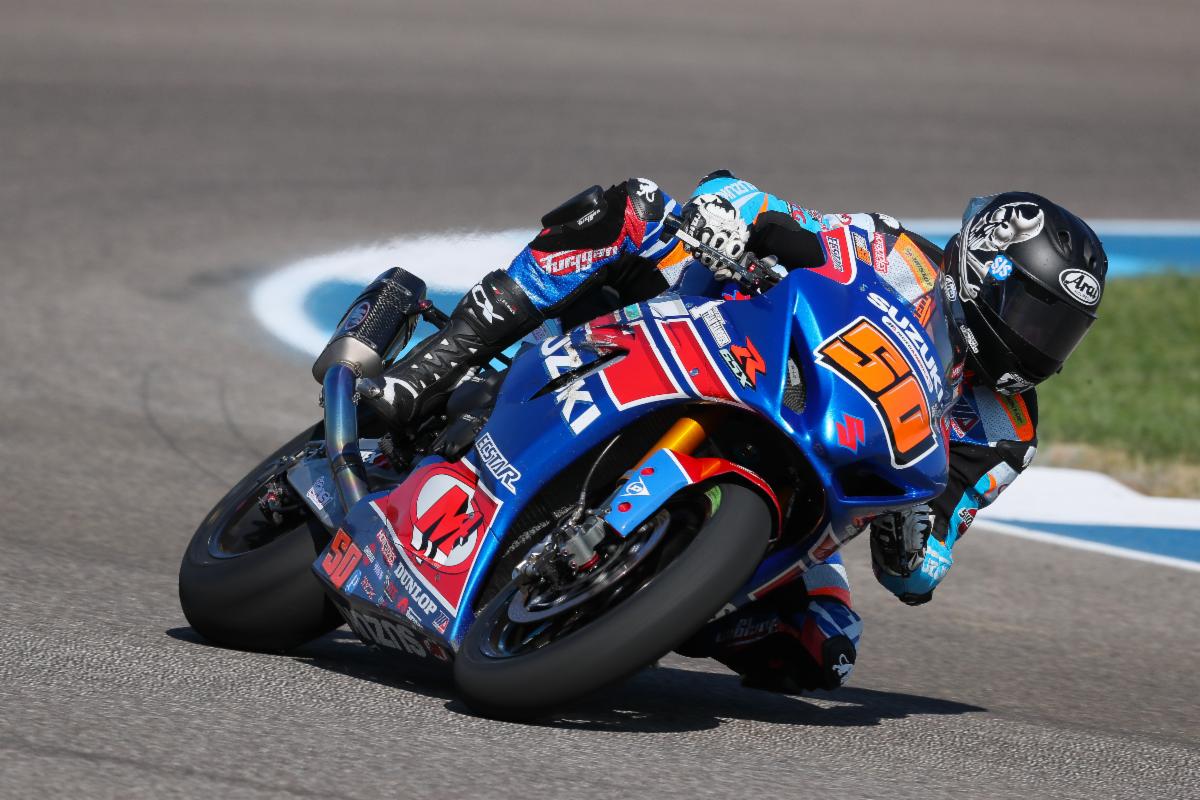 Brea, CA (October 12, 2020) –Suzuki Motor of America, Inc., and Team Hammer reaped the rewards of a season’s worth of hard work with a highlight weekend of the 2020 MotoAmerica AMA/FIM North American Road Racing season to date at Indianapolis Motor Speedway. By the time the final checkered flag at the Brickyard had waved, the pairing had gained two national championships, three race victories, four pole positions, and six podiums.

The rider who grabbed that final checkered flag was M4 ECSTAR Suzuki’s Bobby Fong, who enjoyed perhaps the finest weekend of his decorated professional career. On a historic MotoAmerica Superbike tripleheader weekend, Fong took a narrow victory in the Saturday’s race aboard his Suzuki GSX-R1000, backed it up with a close second in Sunday’s first race, and then pulled off a dominant, runaway win in the day’s concluding contest.

“It’s great to be back up here,” Fong said after his Sunday triumph. “It’s been a long season and my M4 ECSTAR Suzuki is finally coming into its own. I didn’t really have a gameplan coming into the final race, but my coach, Josh Hayes, said I just had to be relentless out there. I just plugged away and put in my laps.”

Fong consistently performed his best despite a large number of obstacles, including several red flags as well as competitors crashing near him. Fong avoided trouble throughout yet ran a strong race pace that was tough to match. The Californian now has three Superbike victories this season to go with the Supersport crown he won last year while mounted on a Suzuki GSX-R.

“The bike was awesome,” he added. “Big kudos to everyone on the team. They’ve been supporting me all year long, and I can’t thank them enough for all they’ve done.” 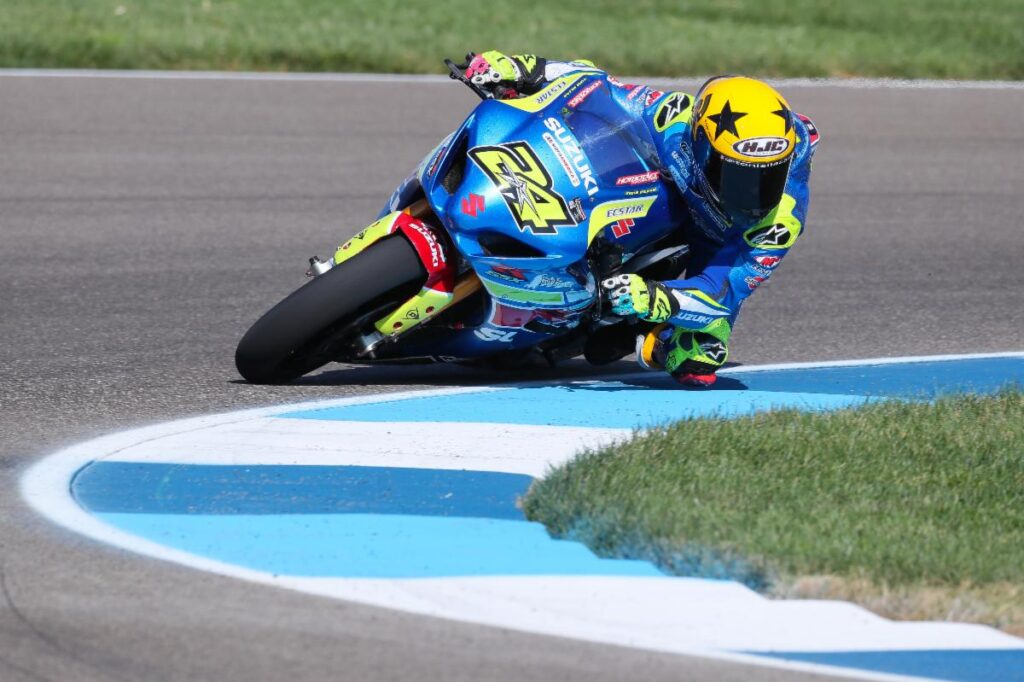 Toni Elias (24) was impressive taking pole position and securing a pair of top-five finishes at Indy. Photo by Brian J Nelson.
His premier-class teammate, Toni Elias, was in outstanding form in Indy as well, powering to pole position aboard his M4 ECSTAR Suzuki GSX-R1000. Elias’ results were dampened by some misfortune — a red flag was shown while he was running second on Saturday and he crashed out of the lead as he and Fong were pulling clear early in Sunday’s second race – but he still managed to net a pair of top fives (fourth and fifth) on the weekend. 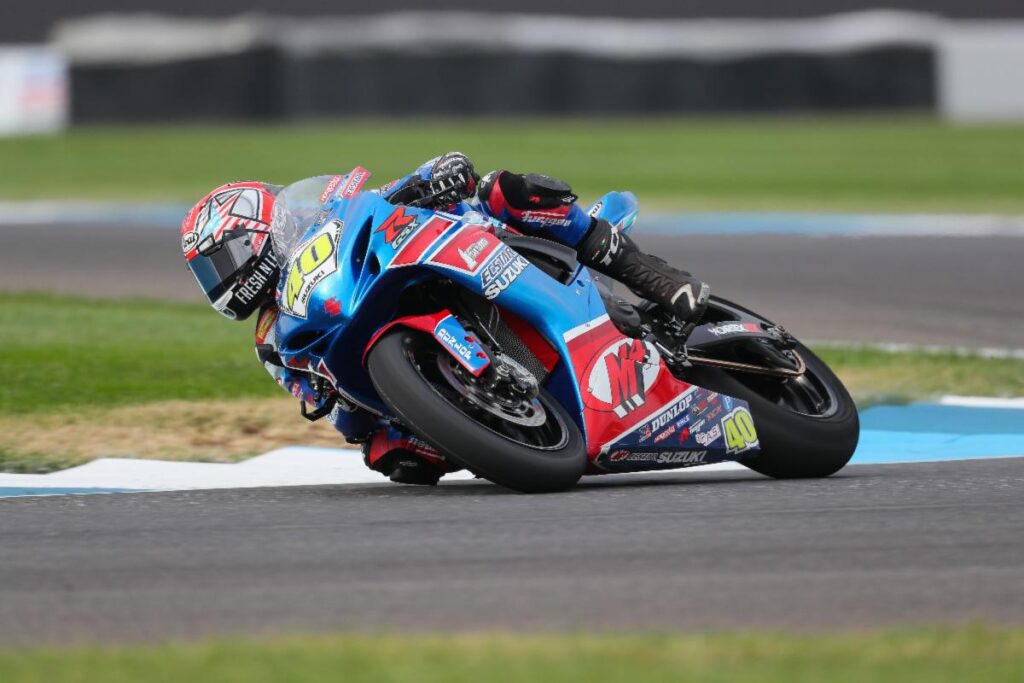 Sean Dylan Kelly (40) took pole position and had a solid result on his GSX-R600. Photo by Brian J. Nelson.
Meanwhile, M4 ECSTAR Suzuki’s MotoAmerica Supersport duo of Sean Dylan Kelly and Lucas Silva showcased their skills as well. Kelly earned the pole aboard his GSX-R600, but made a small mistake on Saturday while leading in a ‘must win’ effort to keep his title hopes alive. He bounced back from the fall to finish as the Supersport runner-up on Sunday. 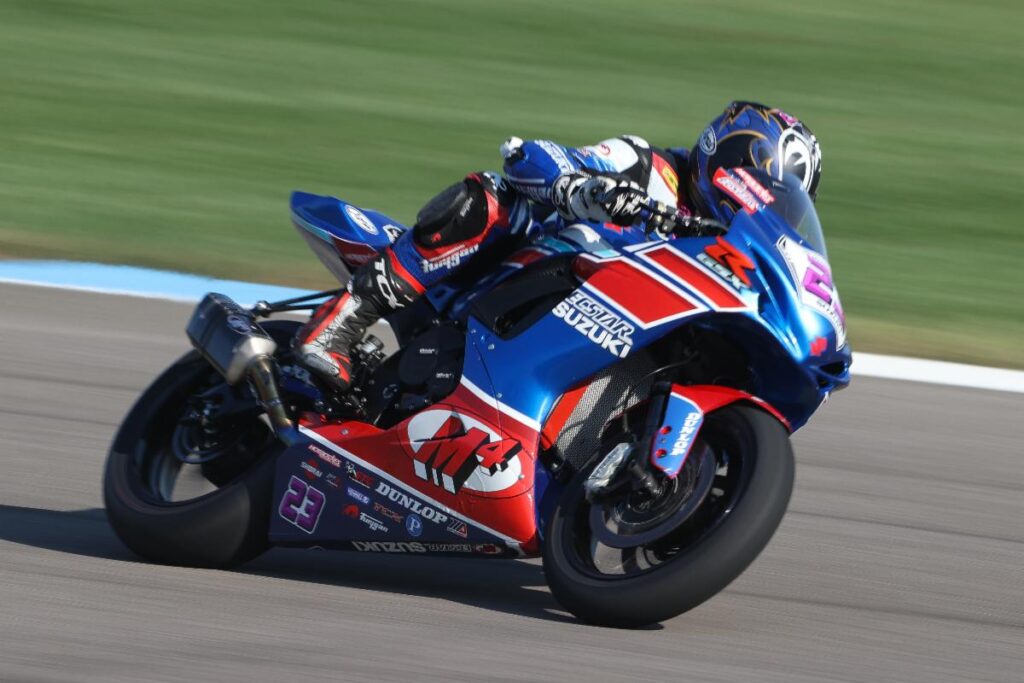 Lucas Silva (23) continued his streak of top-ten finishes on his GSX-R600 at Indy. Photo by Brian J Nelson.
Silva, meanwhile, battled for the podium on Saturday, running in second position until he was pushed wide on the final lap and ultimately came home in fourth. He followed that up with a sixth on Sunday to keep his season-long run of top tens alive.