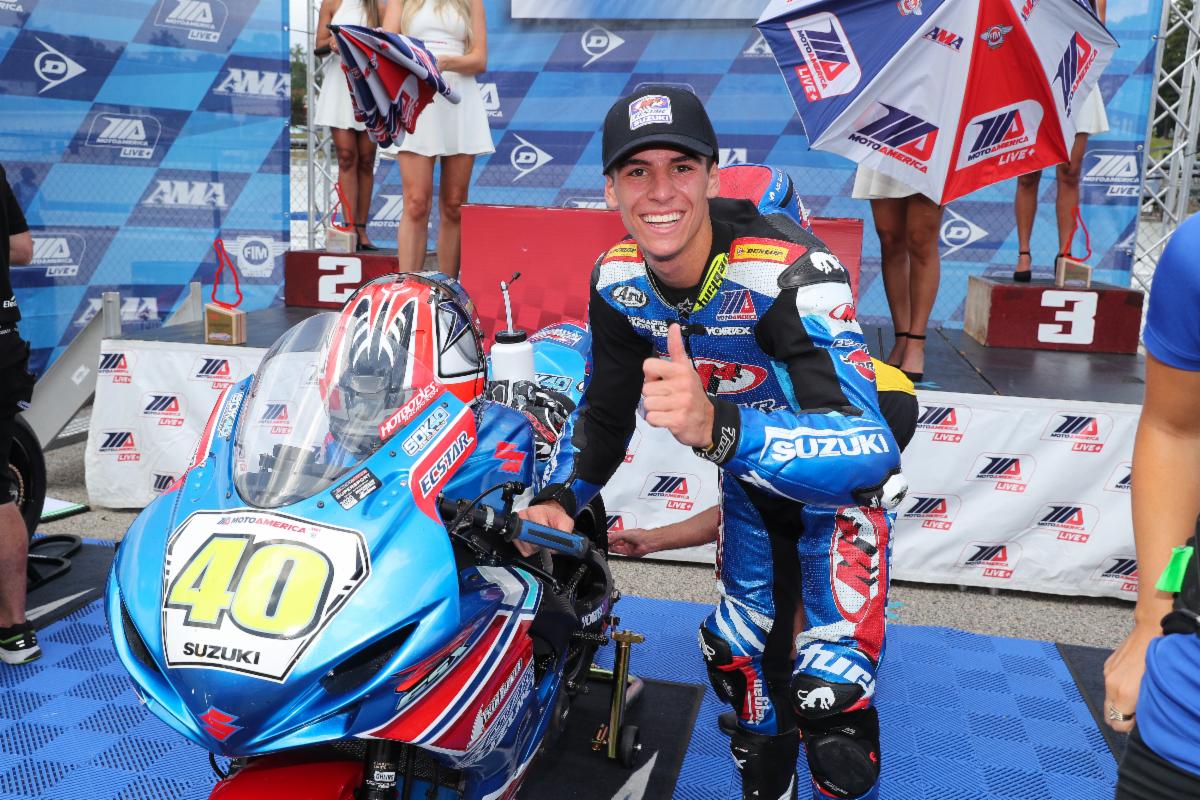 The action on track was even hotter than the sweltering conditions in Saturday’s MotoAmerica Supersport showdown. At the conclusion of 17 laps of repeated draft passes and braking duels, M4 ECSTAR Suzuki’s class title hopeful Sean Dylan Kelly stood atop the podium thanks to a breathtaking final-corner overtake.

Throughout the contest, a confident Kelly routinely put the M4 ECSTAR Suzuki GSX-R600 wherever he wanted, utilizing a variety of lines and late-brake heroics to keep himself in contention for the victory on the final lap.

As the battle for the win closed on the checkered flag, Kelly somehow navigated around a pair of slower riders and then dove up the inside of his chief rival in the race’s last corner to earn his first victory of the season by 0.052 seconds.

The win was the 18-year-old’s third in just over one season of MotoAmerica competition.

Afterward, he said, “Wow! That was a really good race. It definitely was a hard one. Getting our first win of the season feels so good. We started off the season in a difficult way but we fought through and we’re here. I want to thank the whole M4 ECSTAR Suzuki team — they’ve worked so hard. I’m really happy to get this win for everyone and we’re going to do it again tomorrow.”

The day also proved fruitful for Kelly’s teenaged teammate Alex Dumas. The French Canadian notched up another milestone in his meteoric rise, scoring his first career podium finish in the Stock 1000 class aboard the M4 ECSTAR Suzuki GSX-R1000.

Dumas, who raced into the 2020 season on the strength of dominating back-to-back championships in the Junior Cup (2018) and Twins Cup (2019), has instantly proven to be a quick learner — and flat-out quick — on a big-bore racebike as well.

Dumas has climbed up the order in each of his three Stock 1000 races to date, backing up his seventh-place debut with a fourth-place finish in his second attempt. Dumas went one better on Saturday at Road Atlanta, finishing in third position just 0.051 seconds out of second place.

Dumas said, “I feel really good this weekend. I’ve been pretty quick this weekend in practice and qualifying, so I was really looking forward to the race. Unfortunately, I made a small little mistake at the beginning and lost some time, but I kept pushing. It’s great to get my first podium of the year. I’m really happy, and I’ve got to thank everyone at Team Hammer and everyone who supports the team.”

He was followed home by Bobby Fong, who came to Road Atlanta fresh off his maiden premier-class victory. Fong’s hopes of backing that performance up with a second consecutive win took a big hit earlier in the day when he crashed his GSX-R1000 at high speed.

The bruised and battered Fong soldiered on to fifth-place points to keep his championship hopes alive.

Lucas Silva continued his perfect season’s run of top-tens with another strong Supersport outing. The native Brazilian initially battled inside the top five before ultimately taking the checkered flag in sixth.

Roadracing World Young Guns/Sportbiketrackgear.com’s Rocco Landers made a spectacular save in the final corner of the Twins Cup race to salvage a podium finish following a race-long battle for victory.

Despite feeling under the weather, Landers pulled an early advantage before settling into second. Landers attempted to position his Suzuki SV650 to make a late strike for the win, but his plan was effectively foiled when he got hung up on lappers on the last lap. Landers still did what he could to claw back the advantage in hopes of snaring an unlikely victory, but ran off course in the last corner as a result.

He somehow managed to keep it upright through the gravel and returned to the track in time to cross the stripe in third position.

Team Hammer will have another opportunity to add to its trophy haul on Sunday at Road Atlanta.