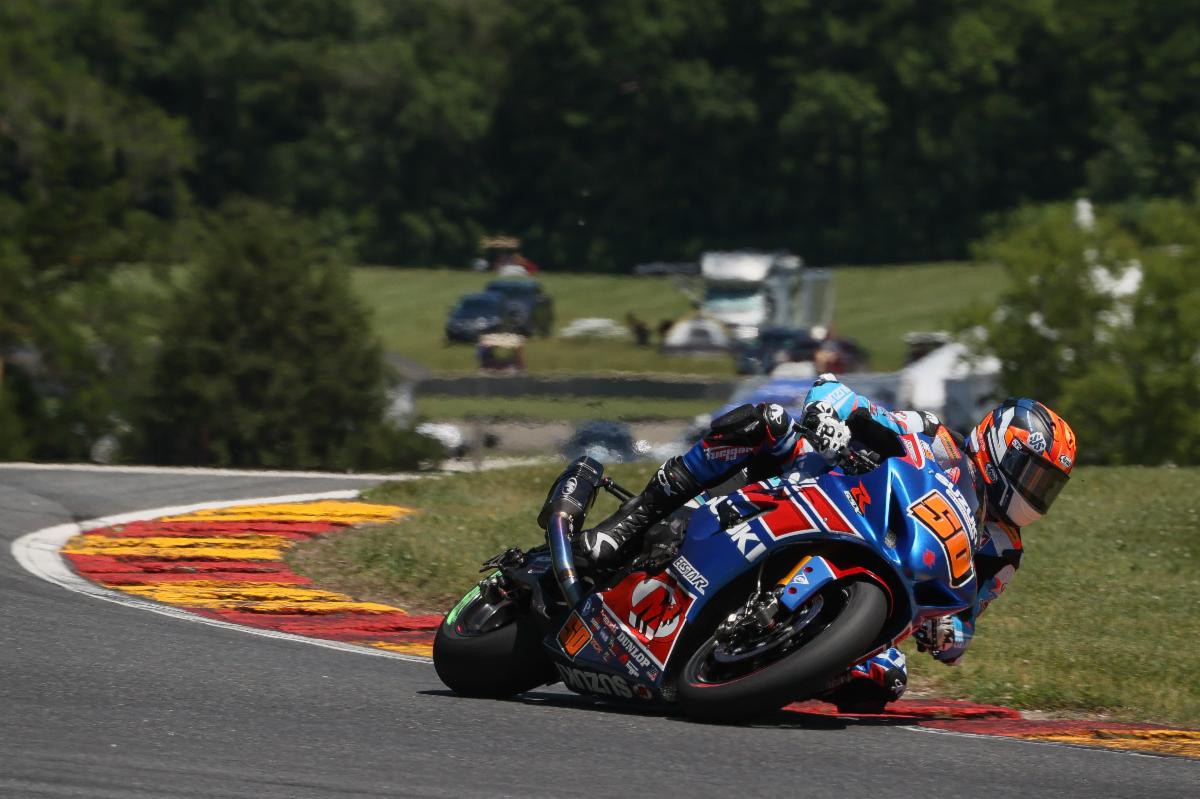 A highly motivated M4 ECSTAR Suzuki squad returned to Road America for Round 2 of the MotoAmerica AMA/FIM North American Road Racing season and finished Saturday with a pair of trophies and two pole positions for its efforts.

Eager to set things right after a difficult opener at the same venue one month ago, Bobby Fong and Toni Elias showcased podium form in Saturday’s MotoAmerica Superbike Race 1. Fong in particular was impressive, the 2019 Supersport Champion continuing to rapidly adapt to the fire-breathing M4 ECSTAR Suzuki GSX-R1000R Superbike and qualifying second in Superpole.

Fong got a good start and put himself in second place on the opening lap of the premier-class contest. Lap-after-lap, the Californian skillfully hustled his machine down the long straights and through the varied corners of the four-mile-long circuit to hold his position and ultimately score an unchallenged runner-up finish.

The podium result signals many more in the future as Fong expects to get stronger with more experience on the bike. “It was definitely greasy out there today,” Fong said. “It wasn’t the same as the last time we were here when the conditions were more ideal. But still, we did the best we could and I’m happy with second. We’re chipping away and getting closer to a race-winning pace.

“My team has been doing a lot of homework, and I’ve been adapting to the motorcycle. I’m really looking forward to tomorrow’s race and hoping to close the gap even more.”

Elias, the 2017 MotoAmerica Superbike champion, engaged in a spirited battle for third a few seconds back. An adversary slipped underneath the Spaniard on the race’s final lap, but Elias immediately responded with a superior drive off the corner heading down the back straightaway. Elias successfully retook third position and held the spot to the checkered flag.

However, he was later assessed to have completed the pass under yellow-flag conditions and was given a 2-second penalty, relegating him to fourth in the official results.

Meanwhile, Sean Dylan Kelly, popularly known as “SDK,” backed up Fong’s result with a second-place finish of his own in Supersport Race 1.

SDK twice leapt out from pole position to grab an early lead on his M4 ECSTAR Suzuki GSX-R600 in the red-flagged and restarted affair, setting the stage for a back-and-forth dogfight over the race’s first half.

The 18-year-old eventually settled into a clear second and scored his second consecutive runner-up finish of the season.

“It was definitely a nice race,” Kelly said. “It’s good to get 20 points, although as a rider, you always want the win, right? But we take the positives, and we gave a better fight today compared with the two races here during the opener.

“I’m just happy we showed a little more potential. And earlier today, I got my first pole position in MotoAmerica, so that’s also something positive. We took a step forward today. We still have some more things to work on, so I’m looking forward to tomorrow.”

Young Rocco Landers will start Sunday morning’s Twins Cup race from pole after topping qualifying with a new class record lap of 2:27.452 aboard the Roadracing World Young Guns/Sportbiketrackgear.com Suzuki SV650 built by Team Hammer. Landers is out for revenge this weekend after missing out on two victories at the opener by a combined 0.084-second

Alex Dumas, who raced another Team Hammer-built SV650 to the MotoAmerica Twins Cup title last season, continued to flash major-league talent with an impressive performance in Stock 1000 qualifying. After qualifying and finishing seventh in his class debut on the Team M4 ECSTAR Suzuki GSX-R1000, Dumas qualified fourth on Saturday with a lap nearly two seconds quicker than his qualifying best from the opener.

Team Hammer will round out the Road America weekend on Sunday, looking to continue the momentum.