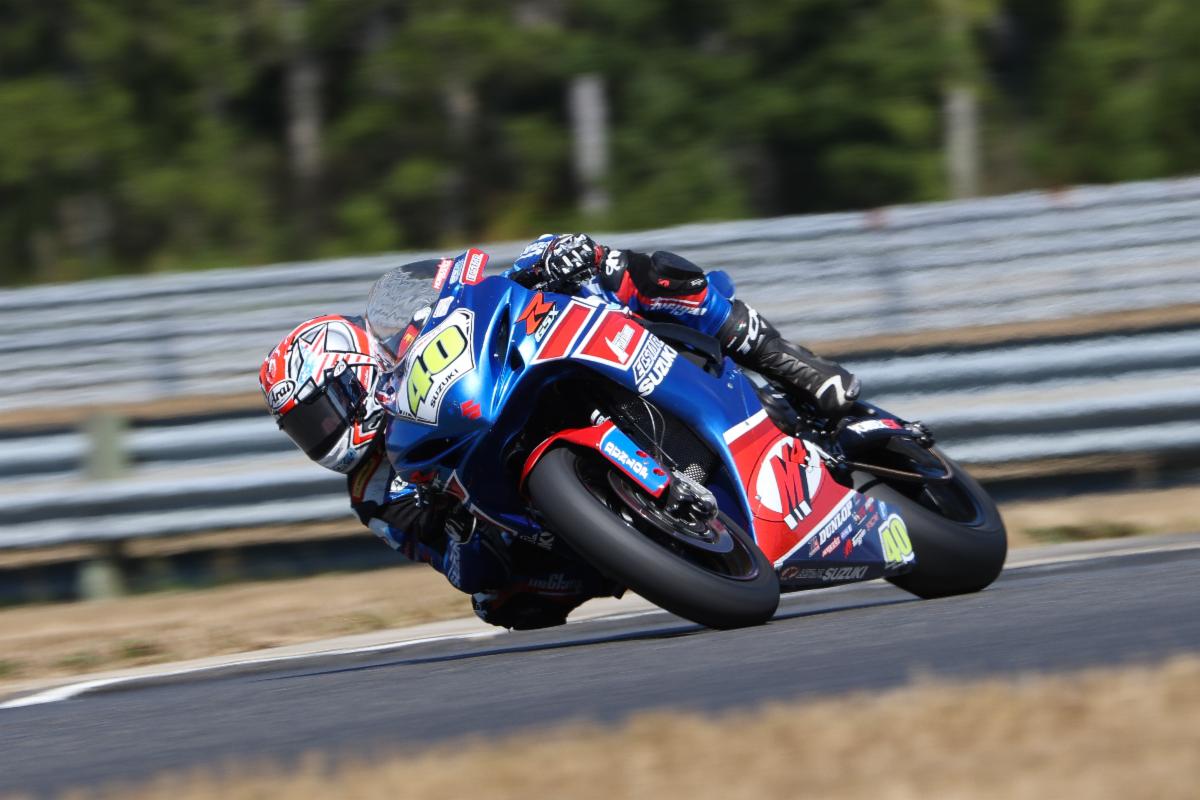 Team Hammer put on another display of paddock power on Saturday at Ridge Motorsports Park in Shelton, Washington, placing multiple riders on the podium for the eighth straight race day during this MotoAmerica AMA/FIM North American Road Racing season.

Even with a win and a runner-up result for the squad on the day, the highlight may have very well been the third-place finish of M4 ECSTAR Suzuki’s Bobby Fong in the premier MotoAmerica Superbike class.

The Californian came into the weekend far less than 100% and still on the mend after injuring his left wrist at the previous round, and crashed again on Friday, aggravating the injury.

Still, the reigning Supersport champ managed to qualify his GSX-R1000 on the front row. Fong then executed two stellar starts in the once stopped-and-restarted race and not only gritted it out for full race distance, but battled it out up front. He defended third position deep into the contest, made a pass into second, and held the position before being passed late on the last lap and ultimately finishing third.

When asked how he managed the brave ride despite the pain, Fong said, “I knew my guys have been working hard all weekend just to get this bike to where it is. These guys give me motivation to do what I do because I know they’ve put this thing together plenty of times for me. Hats off to my M4 ECSTAR Suzuki crew. We’re looking forward to tomorrow.”

SportbikeTrackGear.com Suzuki’s Rocco Landers rode his Team Hammer-built SV650 to a Saturday win and did so in emphatic fashion. Landers blitzed the MotoAmerica Twins Cup field in qualifying, taking the pole by over two-and-a-half seconds. He then put that superior pace to good use, assembling a massive advantage before the race was finally called complete following a late red flag.

Landers said, “My SportbikeTrackGear.com Suzuki SV650 has been awesome this weekend. The team worked super hard prepping the bike and getting it ready for the race and we made the right tire choice. It’s only due to a few small hiccups that we’re not leading this championship right now, so we’re just going to keep pushing and keep pushing and see what we can do.”

MotoAmerica Supersport title contender Sean Dylan Kelly guided his M4 ECSTAR Suzuki GSX-R600 to a top-two finish for the eighth consecutive race. The teenager stormed to pole position and then spent the bulk of the race’s opening half leading an intense three-rider fight for the position.

He was displaced to second with five laps to go and then shifted his attention to holding onto the spot. ‘SDK’ swapped second and third back and forth with a rival before finally claiming the runner-up spot at the checkered flag.

After the race, Kelly admitted, “I’m disappointed because we’ve been getting a lot of second places and we’re here to win. But at the end of the day, we have to be happy that we’re still getting 20 points for the championship and we’re fighting. We didn’t have quite what we needed to fight for the win until the very last lap but we know what to work on for tomorrow. We’re going to sit down and do our homework and there are some things we saw in the race that we were lacking.

“I think we still gave a very good fight. I want to give a huge thank you to my whole M4 ECSTAR Suzuki team. We’re working extremely hard and we’re going to come back strong tomorrow.”

2017 MotoAmerica Superbike Champion Toni Elias made it two M4 ECSTAR Suzuki GSX-R1000s in the Superbike top five with a run to fifth.

Fong and Elias were joined in the Superbike race by Stock 1000 ace Alex Dumas. Dumas lined up for the race after qualifying on the front row for Sunday’s Stock 1000 contest but was taken out in a multi-rider lap one incident. The French Canadian suffered a broken bone in his right elbow and was unable to make the restart.

Lucas Silva rounded out an impressive day for the team with another strong effort alongside SDK in Supersport action. Silva pounced from his second-row grid position and momentarily controlled third position before eventually finishing in sixth. The result was Silva’s fifth finish of sixth or better and extends his season-long streak of top-10s.

Team Hammer will look to add more wins and podiums to its extensive tally as the MotoAmerica weekend at “The Ridge” concludes on Sunday.