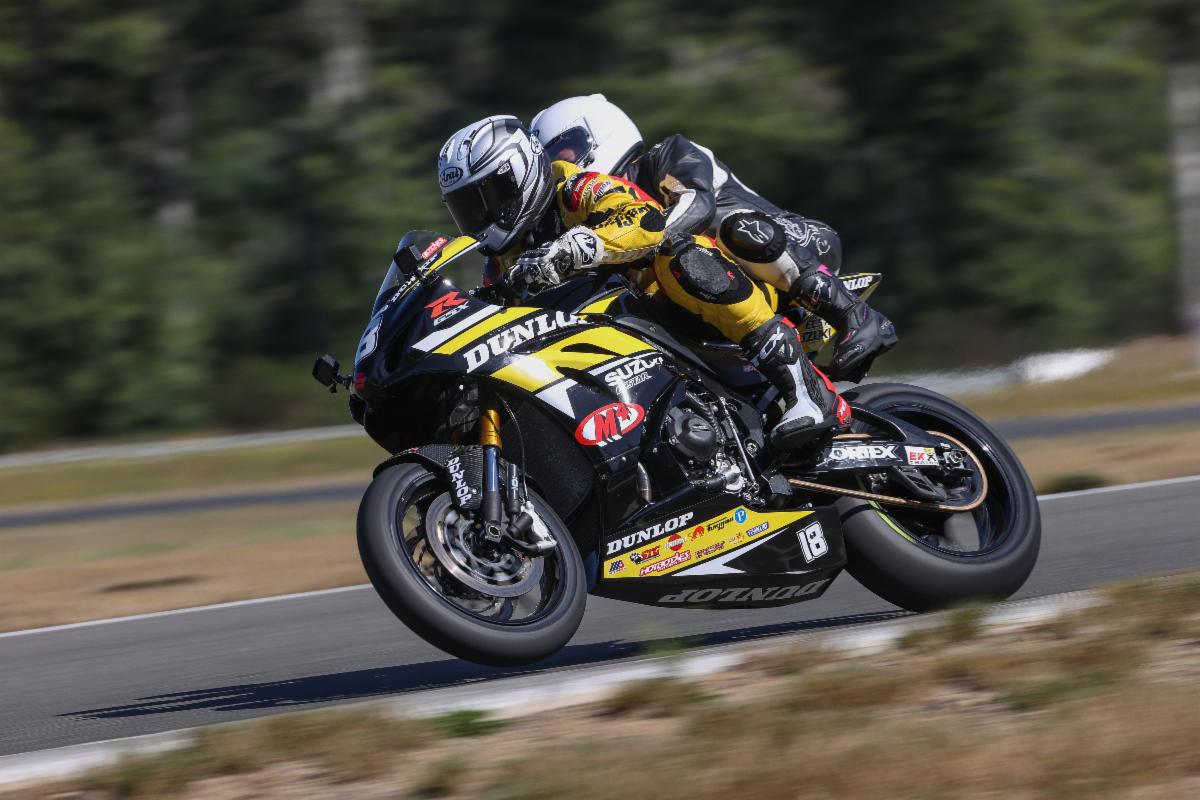 Dunlop is returning as a title sponsor of Team Hammer’s Dunlop ECSTAR Two-Seat Superbike program for a fifth consecutive season in 2021.

The program, now entering its 21st season of operation, expanded its scope and reach significantly in 2017 with the introduction of the partnership with Dunlop. During that span, the Dunlop ECSTAR Two-Seat Superbike program run by Team Hammer has provided fans, VIPs, and media reps an unforgettable experience while giving back to the sport it evangelizes.

The awe-inspiring first-hand experience of riding on a MotoAmerica Superbike piloted by former professional racer Chris Ulrich provides thrills no amusement park could hope to match. The acceleration, speed, lean angles, control, and precision on display during the ride routinely leaves participants with a deeper admiration and appreciation for a sport they already love.

At the same time, the donations to the program at each stop on the MotoAmerica AMA/FIM North American Road Racing Championship tour help make racing safer by directly supporting the Roadracing World Action Fund (RWAF), which has raised more than $2 million to improve rider safety through the purchase and deployment of soft barriers.

“The Dunlop ECSTAR Two-Seat Superbike has been a great addition to MotoAmerica, and we’re pumped that it is back for 2021,” said MotoAmerica President Wayne Rainey. “There is no better tool to show journalists, VIPs and fans what motorcycle road racing is all about because the speed, the acceleration and the lean angle our Superbikes are capable of is impressive. There are not many professional sports where you can actually get out there and do what the stars of the sport are doing, but you can hop on the back of the two-seater with Chris Ulrich and find out exactly what it’s all about. I think it provides people the unique opportunity to really see how athletic our racers are and just how thrilling it is to ride a Superbike.”

“In 2020, the Two-Seat Superbike Program raised about $10,000 for the Roadracing World Action Fund despite dealing with COVID-19 restrictions,” said Two-Seat Superbike pilot Chris Ulrich. “We could not have done it without the support of Dunlop, MotoAmerica, and our enthusiastic passengers. Now I’m looking forward to getting back to the races and working to double or triple the money raised for soft barriers while also continuing to work to grow the sport of motorcycle road racing, one thrill ride at a time!”

Rob Montasser, Director of Sales at Dunlop, said, “We’re extremely excited to be involved with the Dunlop ECSTAR Two-Seat Superbike Program once again in 2021. It’s been a terrific success on every level, and we at Dunlop love having the opportunity to help grow the sport simply by showcasing how incredible it really is.”

Once again, Two-Seat Superbike rides for fans, media representatives and VIPs will take place on Friday, Saturday, and Sunday of each MotoAmerica race weekend. Two-seat rides can also be reserved as part of a $500 MotoAmerica fan package, which includes a three-day general admission ticket, weekend parking pass, and a $350 donation to the Roadracing World Action Fund (RWAF), a 501(3)(c) non-profit focusing on improving racetrack safety through education and the deployment of soft barriers made by Airfence and Alpina.
Tickets can be purchased online at https://motoamerica.com/tickets/ prior to each event.